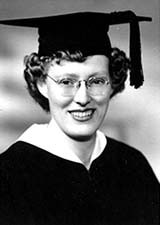 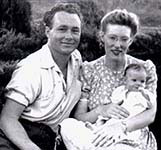 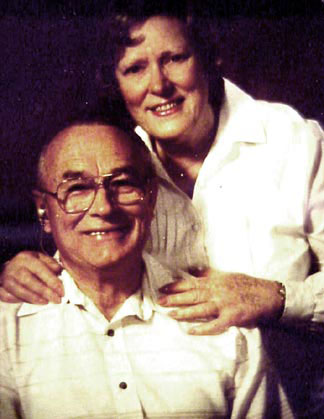 The Story of Milt and Evelyn Haertig

Milt and Evelyn were born into a country on the verge of dramatic, whirlwind changes. These changes helped to instill in them a positive work ethic and motivation necessary to succeed. Neither Milt nor Evelyn were born into wealth, but created a sense of personal wealth through their dedication to the love of knowledge and artistic creativity. This biography is dedicated to their memory.

Evelyn was born in Fitchburg, Massachusetts in 1919. After graduating from Newton High School (near Boston), she attended Cambridge Junior College. While working as a model for several artists while attending college, Evelyn developed an eye for artistic beauty that would last a lifetime. Wanting to experience all life had to offer, she left her home in Boston at the beginning of her sophomore year to attended Pasadena Junior College in California. When World War II began, she started working for Lockheed Aircraft Corporation as a courier of blue print documents.

Milt was born on the family farm in Woodsboro, Texas in 1916. Growing up near the Gulf of Mexico instilled a love of sailing that would always remain a dominate influence in his life. Wanting to see the world, he joined the Navy in 1937 and was soon stationed in San Diego. Unfortunately, at the end of Basic Training he contracted spinal meningitis and lost his hearing. After being discharged, he returned to Texas where he was trained to be a draftsman. During the war, he secured a draftsman’s position at Lockheed where he met a beautiful young woman who worked delivering blue prints to the drafting room. That woman was Evelyn.

They were married in 1943 and settled in Granada Hills. Their first daughter, Rhett Regina was born the following year. Being young and industrious, they built their first house together. When the war was over, they sold their home and traveled around the United States in search of the perfect place to relocate. As life goes, they returned to California to live in Santa Barbara, only a short distance from where they had begun their journey. Milt opened a corner grocery store called the Pantry Shelf. They both worked as a team and at the same time, Evelyn attended classes at the University of California in Santa Barbara. In 1948, their second daughter, Laura was born. In 1951 Evelyn graduated with her BA and a major in History and was admitted to the Honorary Phi Alpha Theta Fraternity.

Always seeking adventure and travel, they took an extensive tour of Europe in 1953 when few Americans thought of travelling to the war torn continent. After returning to California, they moved to Pleasant Hill so Evelyn could continue her education at the University of California, Berkeley to obtain her teaching credential. Milt was hired as a draftsman with Yuba Manufacturing Company in Benicia. In 1956, Evelyn began her 25 year career as a public school teacher. She had a passion for teaching English on the high school level, and especially enjoyed supervising the publication of the school yearbook. After winning a Wall Street Journalism Scholarship, she returned to college where she completed a Master’s Degree in journalism.

Upon retiring, Evelyn and Milt started an antique business. After collecting antiques for many years, their house was filled with many beautiful pieces. Hoping to establish an antique shop, they bought an old Victorian house in Jacksonville, Oregon. Unfortunately, they were unable to obtain the necessary permits to start a business at the house, and decided to return to California. They did, however, keep their business name of Helms House Antiques, named after the Herman Helms family who had built the Oregon house in the late 1800’s. Instead of reopening an antique shop, they decided to sell their antiques at antique shows. Evelyn felt passionately about her antiques and knowing as much as possible about each piece. She had a few beaded purses in the booth and customers often asked about their history. Always wanting to be knowledgeable about things, Evelyn discovered that there was very little information available. Thus began her quest for knowledge on the subject of antique purses!

Ever meticulous, Evelyn spent seven years researching antique purses and combs. She spent endless hours of research at the Metropolitan Museum of Art in New York City, the National Archives in Washington D.C., and various other libraries, museums and antique stores. They journeyed to France, Austria, Italy, Poland and England in search of places where beads and purses had been made. Along the way, Evelyn purchased purses, Milt took countless pictures and together they gathered extensive information on the history and production of the antique purse. With this wealth of new information, it was time to write and illustrate her first book. Milt worked right beside her. He was an avid photographer, having spent many hours in the darkroom as a young man. He set up a darkroom in the garage to photograph hundreds of purses and combs. He had mastered the technique of developing CIBA chrome prints, something few photographers are doing today.

In 1983, Milt and Evelyn published their first book: Antique Combs and Purses. Not completely satisfied and feeling there was much more to say about antique purses, Evelyn immediately began researching for her next book: More Beautiful Purses which was published in 1990. Again they traveled to Europe to do additional research and find unique purse collections. They both had come to admire purses as works of art. Since its publication in 1990, More Beautiful Purses has become the “Bible” for collectors and museums world wide!

Being old and fragile, many of the purses Evelyn collected were badly in need of repair. She spent countless hours repairing these old purses, restoring them to their original beauty. She collected frames, and purchased additional beads to be used for her repair projects. Through hard work and determination, she became an expert on the process of purse restoration. Wanting to pass on her experience, she held numerous workshops for fellow purse restorers. In 2000, Evelyn published her third and final book: Restoring & Collecting Antique Beaded Purses. Her desire to pass on all she had learned was channeled to the contents of this last book.

Due to health issues, she was forced to reduced her antique show schedule to one show per year, the Miami Beach Antique Show. Each January she set up a booth full of purses. It was an amazing sight to see all those purses on display, purses she had spent the past year so carefully restoring.

In January of 2002, Evelyn lost her life companion. Milton had a heart attack and passed away at the age of 85, just one month shy of 86. The following year was very difficult for Evelyn, and it took the effort of family and friends to help her through. At the age of 81, she prepared again an antique booth at the Miami Beach Show and continued doing so for three more years. Unfortunately, at 85, her health kept her from participating in the show. For Evelyn this was a disappointment from which she never fully recovered. In March of 2007, she passed away at the age of 87.

We miss Milt and Evelyn very much! We admire their strength and courage to live life the way they wanted. They were a generation which endured and absorbed so much: childhood poverty, the Depression, a World War, the Korean War, Vietnam, space exploration, television, the computer age and so much more. They saw and experienced so much sadness, but equally so much joy. We are proud to be their daughters!